When they first came out, Chromebooks revolved around the idea of using the Chrome browser as the whole user interface. Even if that concept has evolved along the years, a Chromebook is a very simple and stripped-down compared to an average Windows laptop, or a MacBook. And because Chromebooks were designed to run the Chrome Web browser only, most of them with only 2GB or 4GB RAM. But if you’re looking for an 8GB RAM Chromebook for a more seamless experience, it can be quite hard because Chromebooks with 8GB RAM are still a rarity. And to help you with your search, we made this short guide listing some of the best Chromebooks with 8GB RAM or more available right now. But before we proceed with the list, let’s find out more about Chromebooks and whether you actually need a Chromebook with 8GB RAM.

That same minimalism, and the convenient price it comes at, is the reason why the Chromebooks have traditionally catered to students and teachers across the world. And to be honest, a few years ago I used to dislike Chromebooks, but now I’m rooting so much for this philosophy. As they say, sometimes Less is more.

Most Chromebooks come with a decent amount of storage space, to occasionally download files intended for offline editing. As of recently, Google has introduced Android apps on Chromebooks, drastically improving the options when it comes to user experience. To the point where a touchscreen and convertible Chromebook might be better than a traditional Android tablet. It’s not even that rare anymore to see little to mid companies using Chromebooks for their businesses.

A Chrome OS powered machine usually has a better life expectancy than a Windows competitor. It’s cheaper, more secure, and less demanding on the specs department. What that means is you can get better value out of your budget by spending your money on other premium features: a good-looking aluminum body, a high-definition display with narrow bezels, connectivity options and convertible designs.

How much RAM does a Chromebook actually need?

While Windows laptops vary tremendously, most Chromebooks will offer a fluid experience with 4GB of RAM and a mobile processor. Like Linux operating systems, the way a Chromebook manages the RAM enables it to do more with less. While you continue browsing and operating on your laptop, the system shuts down old tabs in the background to never get out of memory. You won’t even notice it!

While they don’t make up for the majority, Chromebooks are starting to come out with 8 GB of RAM and more. The choice is going to depend on how much of a heavy user you are. If you’re planning to buy a Chromebook as a secondary machine to your Windows or Mac laptop, to casually browse, stream and navigate through your feeds as you sip your coffee, a 4 GB RAM model will be fine. If you’ll going to rely on it for your income, instead, and you could see yourself opening more than 30 tabs at a time, with numerous apps on the background, you might want to go for 8 GB. It’ll eventually pay up in the long run, as more demanding features and updates will be released for the Chrome OS.

Here, we’ve reviewed some of the best Chromebooks with 8GB RAM and more, including the flagship Google Pixelbook. We love to keep ourselves on track with the Chromebook niche, so don’t forget to follow us to be updated! 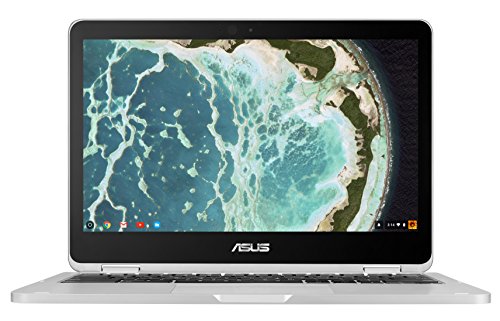 First, the HP Chromebook x360 is a 14” Full HD and touchscreen Chromebook, with a 360° flip and flop design. It features a good looking IPS display with narrow bezels on the sides. The specs on this machine are an 8th generation Intel Core i3 processor, 8GB of RAM and a 64 GB SSD. This model is currently one of the cheapest Chromebooks with 8GB RAM you can find!

Weighting only a couple pounds, the Chromebook x360 is a perfect tool that you can carry along and take out of your bag on the go. If you ever see the need for more storage memory, you can easily upgrade with the featured microSD slot. This machine comes with a backlit keyboard, a USB-B port and two of the latest USB Type-C ports. One of them can be used for charging the device, so forget about your traditional AC adapter!

Next, the Acer Chromebook Spin 13 CP713-1WN-53NF is a beautiful machine, featuring a 13.5” 2K and touchscreen display, with a 2-in-1 convertible design. The display has a 3:2 ratio, which is so good for reading through your documents or sketching and taking notes with a capacitive pen, which is included. The Spin 13 comes with an 8th generation Intel Core i5 processor, 8 GB of RAM and a 128 GB SSD, which is plenty of storage space considering it’s a Chromebook.

This Chromebook has everything that you need all in a slim aluminum body. It’s also one of few Chromebooks with backlit keyboard you can find. You’ll be able to get through a whole workday with a single charge, thanks to the 10 hours of battery life.

I assume that the Google Pixelbook need no introduction by now. This stylish premium Chromebook features a  12.3” QHD touchscreen display, with a convertible design that enables you to use it in four different modes. The ratio of the display is a nice 3:2. The Pixelbook is packed with a 7th generation Intel Core i5 processor, and it should be noted that the Picelbook was one of the first Chromebooks to ever include 8GB of RAM, and one of the few Chromebooks that offer a standard 256GB SSD storage.

The design with this machine is on the point: a sleek, all aluminum body with glossy white finishes, with Gorilla Glass to protect the display. Additionally, you can purchase a Pixelbook Pen for optimized writing and sketching. The Pixelbook is ultimately a high-performance Chromebook, with a built-in Google Assistant that you can call through a dedicated key. With about 10 hours of untethered productivity, you can charge the battery full in just a couple hours thanks to the fast charging.

The Lenovo Yoga C630 is a new Chromebook, featuring a 15.6” FHD and touchscreen display, with a flip and fold design. Coupled with the screen size, it makes up for a perfect machine for streaming media comfortably wherever you might be. The Yoga C630 is packed with an 8th generation Intel Core i5 processor, 8 GB of RAM and a 128 GB SSD.

Despite being larger than your average Chromebook, the Yoga C630 is only 0.7” thin and has a nice, sleek midnight blue body. There’s a microSD slot, a backlit keyboard, three USB 3 ports and one of the latest a USB Type-C port. This is probably the cheapest option if you wish for a Chromebook to replace your traditional 15.6” laptop. And it’s a very good one at that!

We can’t make a list of 8GB RAM Chromebooks without including the ASUS C302CA-DHM3-G. This is a 12.5” FHD and touchscreen Chromebook, featuring a convertible design and a glossy white body. It’s one of the most lightweight and portable that I’ve ever seen! This machine is packed with a 2 core Intel Core m3-6Y30 processor, 8 GB of RAM and a 32 GB SSD. It might seem a little compared to other models we’ve reviewed, but you can upgrade it through the microSD slot.

The C302CA-DHM3-G is not one of the newest Chromebooks out there, but the low budget price and the good setup of specs help keeping it competitive in the Chromebook niche.

The New Asus Chromebook C425 C425TA-DH384 has a lot to offer for its price. It features an 8th gen Intel Core M3-8100Y processor, 8GB of RAM, and a 64GB eMMC Storage. It also has a 14inch full HD display, that has minimal bezels around the screen, which helps reduce the size of this Chromebook. The Asus Chromebook C425 is a perfect fit for those looking for an easy to carry lightweight device, for productivity tasks.

The Asus Chromebook C425 is also featured on our “Best Chromebooks for writers” list. It features a great backlit keyboard that offers 1.4mm key travel distance. Which is not as good as some windows laptops, but excellent for a slim Chromebook like this.

The Acer Chromebook NX.H1LAA.003 is another cheap option that you might want to look at. It features a 14” FHD and touchscreen display, but unlike other models out there it’s not convertible. This one is packed with a Quad core Intel Pentium N4200 processor, 8 GB of RAM and a 64 GB SSD.

Despite being a low budget option, the Chromebook NX.H1LAA.003 comes with a good-looking metallic chassis and a glass touchpad, which makes for a nice finish. It also haves the typical features that you would wish for in a new laptop: a backlit keyboard, plenty of connectivity options thanks to the USB Type-C ports, and a whopping 12 hours of battery life on average use. It’s definitely worth its value!

If you’re a fan of narrow bezels displays, you’ll fall in love with the ASUS Chromebook Flip C434-DS384T. This Chromebook features a stunning 14” FHD and touchscreen display with 5mm thin bezels, that you can fold all the way up and use in four different modes. The tablet mode is great for navigating through Android Apps with ease! Thanks to the narrow bezels, you’ll have a 14” display that fits in a traditional 13” laptop, making it all the more portable. It’s packed with an Intel Core m3-8100y processor, 8 GB of RAM and a 64 GB SSD, which is the standard for an average Chromebook.

This silver machine offers a really good-looking chassis design, with an all-aluminum body. You can make the most out of this laptop for the next few years, thanks to the USB Type-C ports and the bright backlit keyboard. The Flip C434 is also one of the best Chromebooks for writers or anyone looking for a comfortable typing experience, with a keyboard that offers 1.4mm key travel!

Last, we wanted to include a proper beast for the most hardcore users among our readers. Just like the other model that we’ve reviewed, the Google Pixelbook (i7) features a 12.3” QHD and touchscreen display, with a 360° design that enables you to use it in four different modes. Though the specs are top of the class: a 7th generation Intel Core i7 processor, 16 GB of RAM and a 512 GB SSD. Unlike other Chromebooks, this model is a high-performance one that is meant for showcasing the capabilities of Chrome OS, and running demanding apps. This is the Chromebook to consider if you’re a developer, and want a Chromebook to test and develop Android Apps.

You won’t miss the built-in Google Assistant, the backlit keyboard and the fast charging battery, with 10 hours of autonomous life on average use. Thanks to the high amount of RAM and the fast processor, you’ll be able to tackle every task. Or, plug it in multiple displays, to settle a complex setup for your workspace.

Looking for a Chromebook with Docking Station? Here are 3 Best...