In this article, we’ve researched and gathered the best Chromebooks with 16GB RAM available on the market right now!

Chrome OS is lightweight and works very well with less RAM, when compared to other operating systems. That’s why most Chromebooks come with 4GB of RAM installed, and they work just fine for most people. However, if you need more RAM, and if you want to “future proof” your purchase, we have done the research for you, and compiled a list of all Chromebooks with 16GB RAM available right now.

We selected Chromebooks based on the amount of RAM they have(16GB in this case), but also on their price, and most importantly their AUE date. that’s exactly why you won’t find models such as the google Pixelbook which won’t get updates after 2024. If you’re in a hurry, here is  a quick list with all the 16GB RAM Chromebooks we’ve selected:

If you’re already familiar with Chromebooks and how Chrome OS uses RAM, here are the best Chromebooks with 16GB RAM we selected for you:

Do you need a Chromebook with 16GB RAM?

As mentioned before, Chrome OS was designed to make the best use of RAM. And that’s why most Chromebooks have 4GB of RAM and run just fine with no issues. But with Chromebooks becoming more and more powerful over the years,it is usually better to get one with 8GB of RAM if that’s within your budget.

The truth is for most people, who will use their Chromebook to go on Facebook, youtube, Google Drive…etc , 4GB RAM or 8GB is more than enough. So before getting a Chromebook with 16GB RAM, you should really ask yourself if that’s a feature you really need. Chances are that you don’t really need a Chromebook with 16GB RAM, however, if you are coding, developing in Android Studio, or running demanding Linux and Android apps, then you might consider a high end Chromebook from the ones listed here.

Getting a Chromebook with 16GB RAM is also a smart choice, if you want to “future proof” your purchase, since RAM is usually soldered to the motherboard and not upgradable on Chromebooks.

RAM stands for Random Access Memory, and basically, all computers, tablets, and phones need it in order to work. RAM is a fast storage where the OS temporarily stores the needed data to function and perform each task. RAM should have fast read and write speeds.

When you boot your Chromebook, the data needed for loading the OS, the animations, graphics; ..etc is stored in the RAM. The same happens when you start using any application. This means that a system with more RAM will usually perform better, especially when multitasking.

We hope that you have a quick idea about RAM and how Chromebooks manage RAM. If you want a more detailed review of the Chromebooks we selected, check out our list below.

All Chromebooks on this list have 16GB RAM, and you will find the pros and cons of each model. As mentioned before, the AUE date was also taken into consideration, and that’s exactly why you won’t find some older 16GB RAM Chromebooks such as the Google Pixelbook.

First on our list, we’ve got the Asus Chromebook Flip CX3 which is one of the best Chromebooks available right now. The model featured here is the CX3400FMA-DH762T-S which comes with an Intel Core i7-1160G7 processor, 16GB of RAM, and a 512GB SSD. It goes without saying that this is one of the most powerful Chromebooks out there, capable of handling even demanding linux and Android Apps.

The Flip CX3 has a 14 inch Full HD touchscreen, and there is also a built stylus for handwriting and drawing. In terms of ports, There are 2 USB 3.2 type A ports, 1 USB 3.2 Type C ports, and a micro SD car slot. There is also a second camera which is oddly placed next to the touchpad, and isn’t really that useful in my opinion.

One last thing to note is that the keyboard has excellent travel distance (1.4mm), and is also backlit.

This Chromebook also comes with a full HD 15,6 inch screen, that offers good visuals and viewing angles. The screen is not touch enabled on the other hand.

In terms of ports, there are 2 USB-C ports, 1 USB 3.2 type A port, a micro SD card reader, and a built in HDMI port. There is also a built in fingerprint scanner for secure login. The Acer Chromebook 515 also comes with a number pad and a backlit keyboard.

The ASUS Chromebook Flip CX5 is another high performance Chromebook from Asus for those who want to get the most performance on Chrome OS. This one comes with an Intel i7-1160G7 processor, 16GB of RAM, and a 512GB SSD.

The display is a 14inch full HD touch screen, with 100% sRGB color coverage, and up to 300 nits of brightness. There is also a garaged USI stylus.

The HP Elite c1030 Chromebook was designed for businesses who want to take advantages of Chrome OS’s cloud based experience.This Chromebook comes with an Intel i7-10610U processor, 16GB of RAM, and 256GB of SSD storage.

As for I/O, there are 2 USB-C ports, 1 USB 3.2 type A port, and a micro SD card reader. There is also a built in fingerprint scanner, and a physical switch for disabling the webcam.

The ASUS Chromebook CX9 is another premium 14 inch Chromebook that comes with some unique features. The model featured here comes with an Intel i7-1165G7 processor, 16GB of RAM, and a 512GB SSD.

The CX9 comes in an ultra thin 0,62 inch aluminum chassis, and is an excellent choice for those who need a powerful easy to carry Chromebook. The keyboard is backlit and provides an excellent typing experience thanks to the raised position. There is also a numeric keypad that’s built into the touchpad, and which can be activated for an easy access to numbers.

The Asus CX9 also comes with an excellent number of ports, including 1 USB 3.2 type A port, 2 USB-C / thunderbolt 4 ports, a micro SD card, and also an HDMI port, which is quite rare when it comes to Chromebooks.

The HP Pro C640 is another business oriented Chromebook that offers top performance in a lightweight design. This model comes with an AMD Ryzen 5 3500C processor, 16GB of RAM, and a 128GB SSD.

The Thinkpad C13 Yoga is Lenovo’s take on business oriented chromebooks. And the model featured here comes with an AMD Ryzen 7 3700C processor, 16GB or RAM, and a 256 SSD.

The C13 also has plenty of ports, including 2 USB-C ports, 2 USB-A ports, a full size HDMI, and a micro SD card reader.

As its names implies, the Thinkpad C13 yoga has a 13,3 inch Full HD touchscreen, which can rotate up to 360°. The keyboard is very good for typing for a long time. 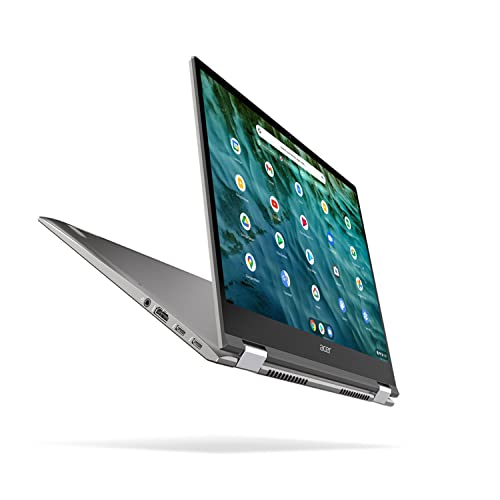 This list of 16GB RAM Chromebook is not complete without the Acer Chromebook Spin 713, which was one of the first high end Chromebook to compete with the Google pixelbook. The exact model listed here is CP713-3W-5491,  and it comes with an Intel Core i5-1135G7 processor, 16GB of RAM, and 256GB of SSD storage.

The screen is another highlight of this Chromebook. The Spin 713 sports a 13,5 inch 2K touchscreen, that offers good color reproduction and excellent viewing angles. The screen also has a 3:2 aspect ratio.

In terms of ports, this Chromebook comes with 2 USB-C ports, 1 USB 3.0 type A port, HDMI, and a microSD card reader.

Last but not the least, we have the ASUS Chromebook Flip C436 <hich comes with a 10th gen Intel i5-10210U processor, 16GB of RAM and a 512GB SSD. This premium Chromebook offers top performance in slim and lightweight 14 inch design. The Flip C436  is only 0.53 inches thick.

In terms of ports, there are 2 USB-C ports, and a micro SD card slot.

That was all for our list! These are the best Chromebooks with 16GB RAM available in 2022. As usual, we will update this  list regularly and if any new models come out, we will make sure to add them here. If you have any question or want us to add a specific Chromebook to this list, feel free to ask us in the comments below.

Yes, of course they do! like windows laptops, macbooks, smartphones, tablets…etc, Chromebook need RAM to store the data necessary for running the Chrome OS and Apps that you open. RAM is much faster than a hard drive or an SSD, and it’s used by the CPU to store common data that the system is in constant use of.

On most Chromebooks, RAM is soldered to the motherboard and thus is not user upgradable. Although some older Chromebooks have regular RAM slots, and can thus be upgraded,  on most new Chromebooks RAM looks like this:

RAM usage is a little different on Chrome OS. Chrome OS allocates RAM dynamically, and will use all available RAM to make the system run smoother, and to cache files. That’s why you will see that RAM usage is usually around 70% even when you’re not opening any tabs, and even on a Chromebook with 8GB RAM or 16GB RAM.

Michael K. Varnum - August 16, 2022 0
Chromebooks are an excellent choice if you’re looking for a lightweight laptop to work on the go. They are thin and light, and offer...