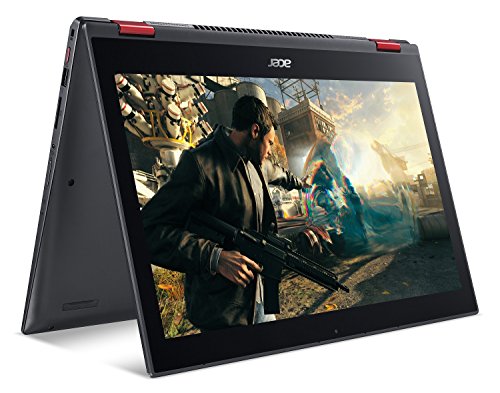 The Acer Nitro 5 Spin (NP515-51-56DL) is one of the first gaming oriented convertible laptops. It is ultra-slim, lightweight, and packs an 8th generation Intel processor along with a dedicated Nvidia graphics card.  With such specs, the Nitro 5 spin looks pretty compelling on paper, let’s see if it lives up to the hype.

The Nitro 5 Spin shares a lot of things with the Nitro 5, they both have the same design and footprint, but the Nitro 5 Spin has an edgier and more “gamer look” with a fully black brushed aluminum exterior with red trims and hinges. The keyboard also has a red backlighting, which adds to the “gamer” look when you open the lid.  The inside of the laptop seems to be made of quality plastic.

Build quality is very good, and there is no noticeable flex when you press on the keyboard. The touchpad is very responsive and Acer also added a fingerprint scanner in the top left corner, which works very well with Windows Hello.

The Acer Nitro 5 Spin (NP515-51-56DL) comes with a 15.6 inch Full HD touch screen which produces sharp images and great contrasts. Streaming or watching Netflix on the Nitro 5 Spin is an enjoyable experience, and the display also has IPS technology, which offers wide-viewing angles and stunning colors. On the other hand, the screen is prone to reflections because of the glossy finish; the brightness is also quite limited, which makes the Nitro 5 spin unsuitable for outdoor use or under direct light.

One of the things that you will notice about the Nitro 5 Spin is the huge screen bezels. This can actually be useful when using the laptop in tablet mode, because it prevents the fingers from accidentally touching the screen. Although it is no deal breaker, I am personally not a big fan. Acer could have made an effort there to try and reduce the laptop’s footprint and weight.

The Nitro 5 Spin has two speakers facing towards the back, the sound quality is good and they are loud enough to fill a small room.

The Nitro 5 Spin (NP515-51-56DL) is equipped with an 8th generation Intel Core i5-8250U, 8GB of RAM, an Nvidia GeForce GTX 1050, a 256GB SSD, along with a traditional 1TB HDD. The Nitro 5 Spin can handle almost anything you throw at it, thanks to the quad core i5 processor, and the snappy PCIe based solid state drive.  But let’s get to the most exciting part and see if the Nitro 5 Spin lives up to its expectations: the gaming performance. The tested model (NP515-51-56DL) comes with an Nvidia 1050, which is an upper mainstream GPU capable of running most triple A games at high or medium settings, but that highly depends on the cooling system of the machine. The Nitro 5 Spin NP515-51-56DL’s performance was quite modest: Even with less demanding titles, we noticed a few frame rate drops here and there. While games such as Dota 2, or GTA 5 are still playable at high setting; you will need to lower the graphics settings for more intensive titles. Another issue is the cooling system: fans will kick in as soon as you will start playing. Now don’t get me wrong, the Nitro 5 Spin NP515-51-56DL is a perfect 2 in 1 convertible if you’re looking for everyday use, video editing, and some mild gaming. But if your main concern is gaming, there are better options out there.

Battery life on the Nitro 5 Spin is good considering the hardware, with no gaming, you can get about 8 hours of use.